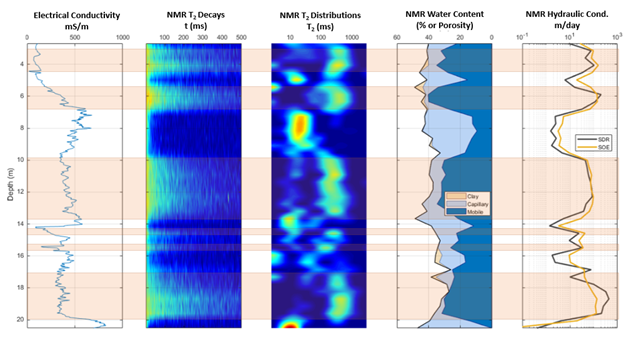 Geophysical NMR measurements deliver reliable and straightforward hydrogeologic information, even in saline groundwater environments. These environments can be challenging to characterize with conventional electrical resistivity measurements, because differences in resistivity may be associated with the fluid or with the formation. Low resistivity could be correlated with a impermeable clay, or just as likely, with saltwater in a permeable sand. Because the NMR measurement directly measures groundwater and the pore geometry, NMR estimates of water content and permeability are largely unaffected by salinity, and can resolve ambiguity inherent other geophysical measurements.

Non-invasive surface NMR measurements can be obtained using Vista Clara’s GMR system, and downhole NMR measurements can be obtained using the Javelin and Dart sensors.  These systems measure the NMR relaxation response, a signal that decays over time and has a identifying frequency specific to hydrogen in groundwater (i.e., H2O). The initial amplitude of the signal is directly proportional to the water content. The decay time T2 indicates whether the water is held in smaller pores (short T2) or larger pores (long T2), and this sensitivity to pore geometry is used to derive estimates of permeability or hydraulic conductivity. The value of NMR data is demonstrated clearly in a study from an estuarine site that is formed as an island between a river system and the Puget Sound. Understanding the site hydrostatigraphy has been important to determine potential interconnection between seawater and freshwater throughout the underlying groundwater system.

A direct push Geoprobe system was used to acquire both downhole electrical conductivity data and Javelin NMR data to around 20 meters.  The electrical conductivity data show some variability, but do not clearly reflect any variations in aquifer properties. A geophysicist or hydrogeologist would struggle to obtain meaningful predictions to build a groundwater flow model. The NMR data, on the other hand, unambiguously reflect strong variations in the hydrogeologic properties of the formation.  Specifically, zones with long T2 decays indicate the presence of permeable sands (highlighted in red), whereas zones with very short T2 indicate confining silty-clay layers.  Beyond high-resolution mapping of structural variation, the Javelin data yield quantitative estimates of porosity and hydraulic conductivity, which compared favorably with hydraulic testing data. While the direct push data deliver high-resolution 1D information at a drill location, surface geophysics can provide 2D profiles, reflecting lateral variation.  As shown in the below figures, an electrical resistivity tomography (ERT) proved to be uninformative; the low resistivity of brackish across the site dominated the response, and no clear structures were observed. A 2D profile using the GMR system, on the other hand, clearly revealed the hydrogeologic structure along the profile line.  The NMR profile shows estimates of the relative hydraulic conductivity and indicates an upper and lower aquifer that are mostly separated by a low permeability layer. We can also observe that the lower aquifer is discontinuous, as disappears to the west end of the site.  This detailed hydrogeologic information would not have been obtainable using any other geophysical method.

The advantage of NMR methods is that they directly detect the pore fluids and unambiguously reflects hydrogeologic properties. It should be noted that the depth of investigation for surface NMR depth may be limited in very conductive environments, but the shallow hydrogeologic response will still be clearly indicated.  Borehole Javelin NMR measurements have proven robust in even the most conductive environments and have been valuable, for example, in characterizing formations targeted in solution brine mining.

Contact our team of experts at Vista Clara to learn how Javelin and GMR data can add value and reduce risk for your project.